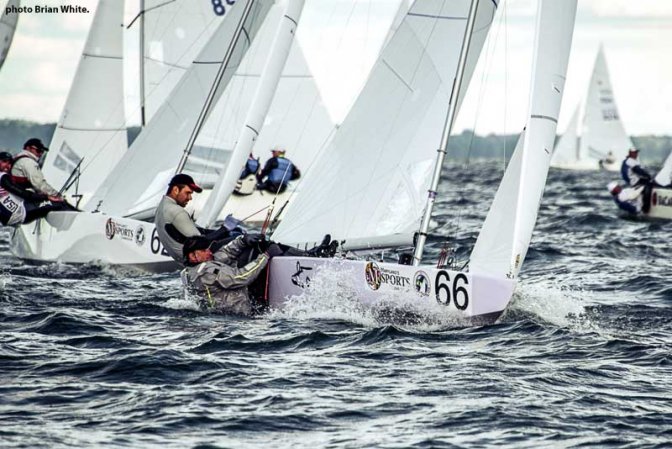 This morning when the 62 teams arrived at the Tred Avon Yacht Club with two races scheduled, the discard coming in play after Race 5, and a very windy forecast, anything was possible. Jorge Zarif and crew Guilherme de Almeida had a comfortable eight point lead over the second place team Paul Cayard (USA) and Arthur Lopes (BRA), and even more over the third place Class President Hubert Merkelbach and Markus Koy (GER). After a DNF in Race 5 for Cayard / Lopes, and a discarded DSQ for 2017 World Champions Eivind Melleby (NOR) and Joshua Revkin (USA) the window of opportunity opened back up for either of the three teams to take the Championship title at the start of a thrilling Race 6.

Jorge Zarif and Guilherme de Almeida fought a tough battle, always sailing within top 10 boats, losing some points in the second upwind beat, then regaining them in the last downwind to finish fourth behind race winner Tomas Hornos and Pedro Trouche, just meters before Melleby / Revkin, Eric Doyle and Payson Infelise in third. The Brazilians narrowly clinched the fourth spot from George Szabo (USA) and Roger Cheer (CAN) by half boat length.

Olympic Finn sailor Jorge Zarif at 26 years old is the youngest World Champion since 1981 when Alex Hagen (GER) won as a skipper at the same age.

“I feel really happy ! The Star is such a traditional Class full of good people - said Jorge Zarif - and good sailors. It feels really good to have the opportunity to put my name on that trophy.”

“It’s a wonderful experience to sail with Jorge - said crew Guilherme de Almeida - He is amazing. I started sailing with his father when I was 14. He took me to the club and he got me sailing Stars and now I am here winning with Jorge at the World Championship, which is a dream !”

Eivind Melleby and Joshua Revkin had a fantastic week that started with two wins in the first day, and they are among the best Star sailors of all time wining in 2017 in Denmark and as runner up this year.

“We wanted to defend the cup of course - said Eivind Melleby - so it is a bit disappointing that we finished in second. But we are pleased with the week because we had two 1st places and a 2nd and all top 10 finishes otherwise. So we are very happy with the results and the sailing. This was a very tough week to sail with light wind and then today with pressure that was up and down and very shifty.”

Paul Cayard sailed in his first Star World Championship 40 years ago as a crew in his hometown, San Francisco. He won the prestigious trophy back in 1988 in Buenos Aires, and since then he has engaged in many more adventures, winning some of the most epic challenges of our sport. Now he is back competing in the Star class with his Brazilian crew Arthur Lopes.

“We had great results and of course we hoped to win - said Paul Cayard, Vice President of the Star Class - But Arthur and I won a race and had a second, and 3rd is a great place overall. We are always excited to have the youth in the Class, Jorge is the son of a Star sailor and Josh [Revkin] and Arthur [Lopes] are both young. What we are most interested in is seeing the next generation coming along, so to see Jorge Zarif win the Star World Championship is fantastic. It says a lot for the Star Class.”

“This is my best result in the Star class and I am very happy - said Arthur ‘Tutu’ Lopes - It was great to sail with Paul, I learn a lot from him."

The week has not been easy, with the weather being greatly affected by Hurricane Michael, but in the end we had an epic last day.

The highly anticipated final race day of the 2018 Star World Championship began early this morning in an effort to complete all scheduled races on time. The fleet embarked on the most challenging day of racing yet and battled 40 degree shifts, an 8-10 knot breeze that built to over 20 knots by the end of the day, and the heaviest current they have seen all week.

Race 5, originally scheduled to begin at 11:00 EDT (UTC -4), took over three hours to begin due to remnant unstable wind conditions. With a now 15-20+ knot north westerly breeze, a heavy ebb current on the course, and an aggressive fleet at the start, 9 teams were forced over the line early and earned a black flag penalty. Greek team Emilios Papathanasiou and Antonis Tsotras took a commanding lead early on but after two major right shifts and a hard fought effort downwind, Italians Diego Negri and Sergio Lambertenghi worked their way into first place and won Race 5. After Race 5 was completed, all teams dropped the worst finishing place from their scoreline and for many of the regatta leaders that was their Race 5 finish. The leaderboard and the point spread between them had officially become unclear and the fleet began the 6th and final race in the 2018 Star World Championship blind.

With the great unknown scoreboard in mind, the top teams took a conservative approach to Race 6, started at 16:00 EDT (UTC -4), and kept to the center of the race course. Tomas Hornos and Pedro Trouche took an early lead on the first weather leg with reigning Star World Champions Eivind Melleby and Josh Revkin hot on their trail. Race 6 was the ultimate showdown between Hornos/Trouche, Melleby/Revkin, and Szabo/Cheer fighting every inch around the race course with Jorge Zarif and Guilherme de Almeida tailing behind them. Tomas Hornos and Pedro Trouche took the final race win of the 2018 Star World Championship in a photo finish with Norwegian team Eivind Melleby and Josh Revkin. Jorge Zarif and Guilherme de Almeida finish in 3rd, narrowly beating American’s George Szabo and Roger Cheer across the line, and solidifying their 2018 Star World Championship win.

2019 Star World Championship will be held in Porto Cervo, Italy, hosted by the Yacht Club Costa Smeralda from June 13th to 23rd.