Team Alinghi became the third team to win one of the three 2004 Louis Vuitton Acts on Sunday, as a pair of top-three performances secured them the Valencia Louis Vuitton Act 3 regatta on the last day of racing. BMW ORACLE Racing and Emirates Team New Zealand were the two race winners on Sunday, putting the Kiwis in second place for Act 3, with BMW ORACLE Racing third overall. Those results give the 2004 ACC Season Champion title to Emirates Team New Zealand, a remarkable recovery from their America’s Cup America's Cup #AmericasCup loss in 2003.

Team Alinghi was crowned the winner of Act 3 in front of an enormous crowd lining the waterfront at the Darsena Interior. Fireworks exploded overhead as the team was presented with their trophy and congratulated by the other race crews, along with a flotilla of spectator boats. Emirates Team New Zealand was to be awarded their season champion prize later on Sunday evening.

It was another bright, sunny day on the Gulf of Valencia, and a large spectator fleet was out to follow the final races of the 2004 season. In the America’s Cup America's Cup #AmericasCup Park on shore over 200 000 people enjoyed the action over the Valencia Louis Vuitton Acts, which were covered by 500 accredited media, among them 150 television crews.

It was a day of extremes on the race course. Both races were held to the South of the Port of Valencia due to an air show above the North race course. Racing began in the first match in a light, offshore wind, which proved to be very patchy and inconsistent before dying completely and rebuilding in a different direction. The second race took place in a nice Southeasterly seabreeze of 10 to 14 knots.

Chris Dickson’s BMW ORACLE Racing team figured out the tough conditions better than anyone else, winning the race in convincing fashion by a very comfortable 3:42 margin over K-Challenge, who secured their best Fleet Racing result. Team Alinghi was third, while Emirates Team New Zealand who had led the series by a large margin after the first three races finished in fifth place, allowing the Swiss to open a three point margin on their Kiwi rivals on the points table. This race was a difficult one for everyone but the Americans, as enormous patches of very light wind meant boats sometimes spent long periods virtually stopped. Team Shosholoza, for example, which sailed a good race and couldn’t be faulted on its tactics, rounded the second windward mark in fifth position but stalled before the finishing line, eventually crossing more than 40-minutes behind the race winners.

This was the first contest in conditions like those one would expect for the Louis Vuitton Cup and America’s Cup America's Cup #AmericasCup in 2007 - a classic sea breeze, with the wind offshore from the Southeast at 10 to 14 knots. Emirates Team New Zealand won this race on the first run, when it gybed away from the fleet to the right-hand side of the course. The Kiwis had rounded the mark behind Alinghi, but when the teams converged again just before the leeward gate, Grant Dalton’s team had an eight-second lead. This slim margin was never threatened in the stable conditions, with helmsman Dean Barker covering his opponents up the second beat, and down the final run to the finish.

There were many good performances on the day, with K-Challenge sailing strongly again with a second and fourth place finish. The French team nearly reeled in Luna Rossa on the leaderboard, finishing just two points shy at the end of racing. LE DEFI ended the event in sixth place after a tough day, but was able to stay ahead of the surprising Team Shosholoza. The new entry, +39, recovered with two sixth place finishes on the day, but that wouldn’t be enough to finish ahead of the South Africans in either Act 3, or on the final standings for the season.

The racing today concludes the competition calendar for 2004 for the America’s Cup. The next racing is scheduled for June 2005, with the Valencia Louis Vuitton Acts 4 and 5. 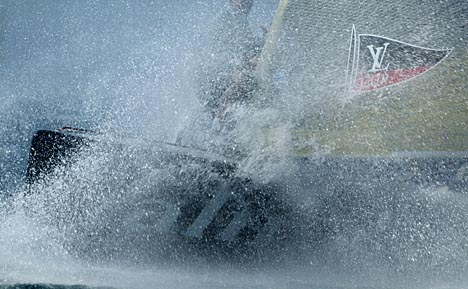 UBS Trophy : BMW ORACLE streaks ahead to win the UBS Trophy over Team Alinghi in Newport