This is the complete mail interview of the manager of the Volvo Ocean Race Volvo Ocean Race #VolvoOceanRace made for a report about the next event in the three-monthly french magazine Course Au Large. Glenn Bourke answers few questions about the new rules, the number of entries, the place and the budget of this race in world of round the world yacht races. 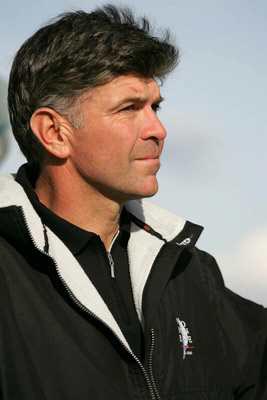 Glenn Bourke : We certainly don’t start from zero. The race has a thirty year history which has built upon those early Corinthian days into the most recognised trans ocean sailing event in the world. It is an event which is considered in the same breath as the America’s Cup America's Cup #AmericasCup and Olympic Games within the sailing public and general sports lovers.

But to aspire to take the event even further, I believed it was time to make some fundamental changes to the concept of the race. One of these changes was to modernise the boats, to make them more exciting to sail and to give the designers a new avenue of expression for their creative talent. And with the new design comes a myriad of stories which can be created, such as the efficiency of canting keels, the speeds the boats are capable of, the reduction in crew numbers and the complexities that may create, the use of high tech material e.g. carbon fibre. These many facets of change have re-kindled the interest in the class. And for the French market, designers who have been successful in the Open 60 class would be well placed to design successful Volvo Open 70’s, something which had not been achieved in the Volvo 60 era.

Additionally, we included in port racing which we believed would not only make this the greatest all round challenge of any yachting event, but increase the media exposure of the race giving all the sponsors a greater opportunity to improve the return on their investment and encouraging them to return to the race as sponsors for the future.

In terms of the teams, many of the same people who have signed up as Preliminary Entries are here with us again, but fortunately there are new faces as well. In changing the class or the concept like in-port racing we have had to start from zero, but we have created a better product for those teams to sell to sponsors.

Why have you chosen to change the design rules ?

GB : Mainly because the Volvo Ocean 60 had reached the point where it was no longer cutting edge. I would say generally every 15 years or so a class needs to be updated. We have seen this with IOR , IMS and even IRC and recently senior people within the America’s Cup America's Cup #AmericasCup have mentioned that they believed a new design was necessary for the 2007 and was definitely required for the next AC after 2007.

So we decided the timing was good for a change, the designers and sailors agreed and we set about finding out their views on what the new boat should look like. I can openly state that the boat we have now is a distillation of all of those comments and whilst I acknowledge we did not get total agreement on every element, I would say generally about 80% of the people we spoke to agree on the key features.

Why don’t you have chosen the Open 60 rule. Designers could have conceived new yachts under this rule, with the crewed round the world race in mind ?

GB : We have always viewed the history of the race as an important component. In the past the race has always been a monohull, fully crewed, lap around the globe with stopovers. As Open 60’s were predominantly designed for single or shorthanded racing we did not feel comfortable that they fit within the "fully crewed" ideals of the race. And, that if you decided to race this class fully crewed, none of the existing fleet would be competitive with boats which are designed for the Volvo Ocean Race Volvo Ocean Race #VolvoOceanRace .

There won’t be a new The Race event or The Race Tour but there will be the Oryx Cup. Is there enough place for different crew round the world races in terms of skippers, budgets, media coverage ?

GB : Fortunately, at the moment there doesn’t appear to be any major clashes on the ocean racing calendar and I am pleased that this the way the schedule of events has evolved. We feel very comfortable at this stage, that there is a growing enthusiasm for the Volvo Ocean Race. The fact that several other events have postponed their start dates has also helped keep the focus directly on the bigger and more established event like the Volvo Ocean Race. As for media coverage, you need two key ingredients, the first is an affiliation between teams in the race and the ports hosting the stopover. Fortunately we appear to have procured teams from a greater variety of nations than we have seen in recent memory

There is for the moment few teams... How many boats there will be on the starting line next year ?

GB : Well this is always hard to predict, but the signs are strong that we will have at least as many as the last race, which was eight. This was a good number as it gave a high level of media exposure to all the participating teams. Obviously if you go past a certain point it makes it very difficult to give broad exposure to the competitors who are at the tail end of the fleet. I believe Formula 1 probably have assessed this over the years and it is why you tend to see about 8 teams represented at their Grand Prix.

Do you confirm that a team which build two boats has to present both of them on the starting line ? Why ?

GB : Yes, we wanted to level the playing field as much as possible and in this first iteration of the new class we wanted to ensure that every boat which was built would be sailed in the race. We didn’t necessarily want the stronger teams to build two boats and only sail one which would seem a waste. So if a team decided to build two boats to test against each other, they did so with the knowledge that they would be sailing both in the race, and therefore their budgets had to match this prerequisite.

Why do you think there will no French teams on the starting line next year ?

GB : We still have one French team working on a sponsorship (ndr : Patrick Tabarly). If they do not succeed it will be something of a mystery to me as the Volvo Open 70 has many of the character traits of the Open 60 class and should be suited to people who race and design the Open 60’s. I can only assume that the French public and sponsors are more romantically involved with the notion of single-handed racing and in some cases with multihulls. But as I mentioned earlier, the history of the race and it’s roots were considered fundamental when we were considering the new concept for the race, and as such we decided to stick to monohull and crewed.

There won’t be a stop over in La Rochelle like last time. Why ? Not enough coverage in France ? No interest for your sponsors ? Not enough French teams involved ?

GB : There is no doubt that La Rochelle is a beautiful city and many of us enjoyed it as one of our favourite port destinations. The port organisers did a great job with the village and the turnout by the public was excellent. Not to mention the food which was fabulous. But as with many of the ports along the route we decided to favour ports which also supported teams in the race. We saw this first with Telefonica and the Galician Government getting together and also Amsterdam and Melbourne, who are actively pursuing boats competing in the race from their local regions. We worked hard towards securing a French entry and we visited many French ports including Antibes, St Tropez, Cannes, Marseilles, Le Havre and La Rochelle just in case a team was created from France, but ultimately we had to finalise the route and as an entry had not appeared from France we made the tough decision not to go there.

Which is a budget for a team to prepare and compete to the Volvo Ocean Race and do you have informations to compare it to a Vendée Globe budget, a The Race / Oryx Cup, a Trophée Jules Verne project ?

GB : A proper budget for the Volvo Ocean Race is around 12 million Euro +/- 3 million Euro. I realise the teams for the Vendee Globe Vendee Globe #VG2020 probably work on a significantly smaller budget than this, but the international exposure gained from the Volvo Ocean Race is significantly greater and in fact is the most covered sailing event in the world. As an example the illbruck and Assa Abloy boats which finished first and second in the 2001/02 race received an overall media return in the region of 60 million Euros. In terms of the other events you mention, it seems clear to me that the massive boats raced in the The Race/Oryx Cup and Trophee Jules Verne must be quite expensive to build, certainly substantially more than our 70 footer, while the running costs might be cheaper as these races are do not stop in ports. Unfortunately for them, much of the media created by our event is generated by the news media who gather in stopover ports for arrivals, in-port races and leg departures, a facet which non-stop raceds clearly cannot capitalise on as we do.

GB : Yes we did consider it for some time and I even spent some time discussing this option with Pierre Fehlman, the man who created the Grand Mistral. As you probably know Pierre has had a long history with the Whitbread Race and he made it very clear to me that there were far too many problems associated with the one design theme to make is worthwhile. Additionally we always wanted make our new class a haven for designers young and old to express the latest in thinking and to create a class which could evolve with time and not be outdated in a very short period of time. I’m sure all the designers would agree we have created a complex proposition for them to ponder and they are currently enjoying the prospect

VOLVO OCEAN RACE / La Rochelle : John Kostecki : "We will be keeping our eye on Assa Abloy more than the other boats" 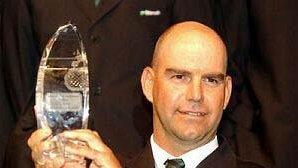 VOLVO OCEAN RACE : John Kostecki : "It’s great to be back in the United States"

VOLVO OCEAN RACE : Kevin Shoebridge on the dockside in Miami