Sébastien Josse : "we’ve come to a decision and we’re opting to build a new boat !"

To modify and adapt a monohull from the current generation or design and build a new craft, such was the first question Sébastien Josse and the Gitana Team needed to answer. The choice is made. It will be a new monohull designed by Guillaume Verdier Architecture Navale Architecture navale #Architecturenavale and VPLP Yacht Design (Marc Van Peteghem and Vincent Lauriot Prévost).

“Since the finish of the last Vendée Globe, a new class measurement (technical rules which govern the Imoca Imoca #IMOCA class) has been adopted. To put it simply, it calls for a one-design mast and keel on all the new boats. These rules put rather a new light on things and anyway they needed to be interpreted to determine if the gain in performance of a new boat was a given. After much study and deliberation we’ve come to a decision and we’re opting to build a new boat !” beamed the skipper of Edmond de Rothschild.

And it’s not hard to understand why Sébastien Josse is a happy sailor ! Indeed, not only does he have a well-stocked sporting programme for the next few years, which will enable him to take the start of the finest offshore races of the moment, he’ll also be able to rely on a state-of-the-art machine to take up the gauntlet of the various challenges announced. It’s an opportunity he’s weighed up :

“To my mind, it’s clearly more interesting to start out from a blank page. There is no compromise to be made in relation to a base that already exists. We’re starting over from scratch as much in the architectural choices as the materials selected and we’re relying on all the latest technologies that have been developed. It’s a very exciting challenge and I feel incredibly lucky.”

A Verdier VPLP design in collaboration with the Gitana Team

In this way, the future “Edmond de Rothschild” is the third new generation monohull announced for the next Vendée Globe. Furthermore, like her predecessors, her design will be the fruit of the work carried out by the association of two firms of naval architects based in Brittany : Guillaume Verdier Architecture Navale Architecture navale #Architecturenavale and VPLP Yacht Design (Marc Van Peteghem and Vincent Lauriot Prévost).

“The decision to go with this pair of naval architects was a natural and virtually logical step for us. They have been tracking all the evolutions in the Imoca Imoca #IMOCA class for over eight years and they’ve demonstrated that they design very high performance boats. Because of their contribution alongside Safran and Banque Populaire, they are ahead of the game on the architectural interpretation of the new class measurement, which will enable some time saving in the study process,” Sébastien Josse explained.

Wishing to retain its singularity whilst not taking any chances, Gitana Team has also put together an in-house design office comprising Antoine Koch and Sébastien Sainson, who will work in close collaboration with the Verdier – VPLP duo :

“Antoine Koch is an asset in our plan of action. Trained as a naval architect with a degree from Southampton University, like Sébastien Sainson, Antoine is also a seasoned sailor (transatlantic races in singlehanded and doublehanded configuration on both a monohull and a multihull, Figaro circuit…). Thanks to this double talent, he can just as easily bring to the surface the information and the sailor’s sensations and translate them into digital information for the project’s engineers, as provide us with interpretations of the studies carried out by the naval architects. Antoine will be one of the main protagonists in this project,” the skipper of Edmond de Rothschild assures us.

The architectural studies required for this new project will begin in mid-April and will continue throughout the design of the 60’ prototype. The build itself will commence this coming June and will continue for around a year. In short, the Gitana Team’s new craft is likely to hit the water over the course of the summer in 2015.

Following an invitation to tender, it’s the Vannes-based yard, Multiplast, which has been selected by Baron Benjamin de Rothschild’s stable for the construction of its future boat. The team’s General Manager, Cyril Dardashti, comments on this choice :

“This project for the Vendée Globe 2016 marks the second construction of an Imoca monohull for Gitana Team. In 2006, we decided to build Gitana Eighty in New Zealand, but for this latest craft we were keen to favour a project closer to home. In Brittany, we’re lucky to have some precision yards at our disposal equipped with some serious industrial tooling. As such the manufacture of the Verdier VPLP Gitana design will be entrusted to the Multiplast yard. The expertise of their teams no longer needs an introduction – the company’s list of achievements testifies to this – and we felt real enthusiasm about giving physical form to a winning project. The timing was also important in our decision as our build schedule is pretty tight, but Multiplast was able to commit to these deadlines and the Gitana Team is very happy about this latest collaboration with the Vannes-based yard.”

A verbatim response from the project’s protagonists :

“I’m delighted to be working with Sébastien Josse again as I worked on the restoration of the monohull he sailed during his first Vendée Globe. The naval architects from VPLP and I have already created six 60’ Imocas together, with some great successes as a reward, and two new boats are being studied. Gitana will be the third monohull of this latest generation. What enables us to differentiate one project from another is the racer’s experience in the architectural choices. The boats we design are prototypes specially tailored to them. Initially, we naturally base our decisions on the scientific studies and we trial things. This ‘scientific’ element gives us the major trends to aim towards, but it’s the ‘human’ element which confirms them once and for all.”

“The Gitana Team’s project is something that thrills our teams for 3 reasons : working with this team, which is committing to the Vendée Globe 2016 with great ambitions and thus perpetuating the supremacy of the VPLP Verdier designs in this race, as well as benefiting from the experience of the Multiplast yard in terms of naval construction and optimising the architect/yard relationship thanks to our close proximity.”

“The entire Multiplast team is naturally very happy with this latest order, which represents over 25,000 man-hours. We thank the Gitana Team for placing their trust in us. It’s extremely motivating to be targeting victory in the Vendée Globe. As is the case for every one of our prototypes, the technicians from Multiplast will be pulling out all the stops to provide Sébastien Josse with a machine equal to his ambitions…”

27 January 2014 : announcement of the monohull project within Gitana Team 15 April 2014 : start of architectural studies with naval architects Guillaume Verdier and VPLP July 2014 : launch of the build at Multiplast July 2015 : theoretical launch of the boat in Vannes 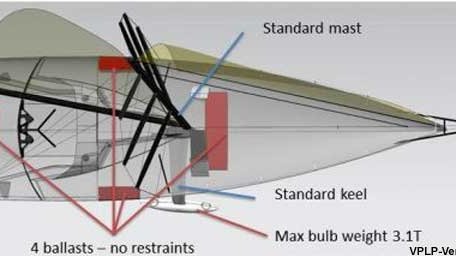