Ministers today announced £7.5million of Government funding to support Sir Ben Ainslie’s America’s Cup America's Cup #AmericasCup team and their proposal to be based on the Camber in Portsmouth. The news follows on from Portsmouth City Council’s decision to give planning approval for the site of the new base.

The announcement took place at 10 Downing Street in the presence of the Prime Minister ; David Cameron commented :

"Sir Ben Ainslie’s project is truly fantastic news for Portsmouth and the Solent. It will not only build on Portsmouth’s global reputation as a centre of marine Marine Marine nationale and maritime excellence but will also deliver a real sporting and economic boost to the UK. It is a great example of our long-term plan – creating jobs as well as opportunities for young people to develop their skills through apprenticeships.

"This is an exciting and historic challenge and I hope the whole country can get behind Sir Ben’s campaign.”

“Portsmouth has a great maritime heritage and we felt it was a natural home for the team’s permanent base in the UK. There is excellent access to the water for the team’s training and to host future America’s Cup America's Cup #AmericasCup events, with fantastic spectator viewpoints. We hope through our journey to bring the Cup home to Britain we will inspire more young people to get involved in the sport, along with supporting the growth of the marine Marine Marine nationale sector in the Solent area to match the country’s F1 innovation hub.”

The headquarters will initially employ about 90 people, with many more potential jobs in the supply chain. It will become the focal point for the design, construction and development of the team’s boats and will also provide sports science and fitness facilities. An apprenticeship and training scheme will ensure the site is sustainable and there will be a drive to ensure the project acts as a catalyst to encourage participation in the sport of sailing, all areas of the marine industry and develop the talent of the future.

The project has the potential to bring significant economic and sporting benefits to the UK, particularly for Portsmouth and the wider Solent area. A recent report on Team New Zealand suggested that its base in Auckland created 1,000 jobs and brought an $88million boost to the local economy.

A visitor centre showcasing the sport, innovation, technology and sustainability will be at the heart of the base, and will welcome schools and community groups. Visitors will experience the construction and on-going operation of the team’s America’s Cup America's Cup #AmericasCup boats first-hand.

In accordance with the team’s sustainability goals – monitored and supported by 11th Hour Racing Inc. – the base will be built to the BREEAM Excellent standard.

Construction work will start immediately, with planned completion in May 2015. Jonathan Goring will be responsible for the project at Ben Ainslie Racing, and he will run a completely separate team and budget to ensure that the base construction has no impact on the crucial drive to win the America’s Cup in 2017. Goring was Managing Director of Capita Symonds, involved in the London 2012 Olympics, and CEO of Capita’s successful consortium that was selected to run the Defence Infrastructure Organisation Organisation #organisation . The team developing the base includes HGP Architects (already responsible for Portsmouth’s iconic Spinnaker Tower at Gunwharf Quay) ; Allied Developments (Main Contractor) ; Reuby and Stagg (Structural Engineers) and Couch Perry Wilkes (Environmental Consultants). 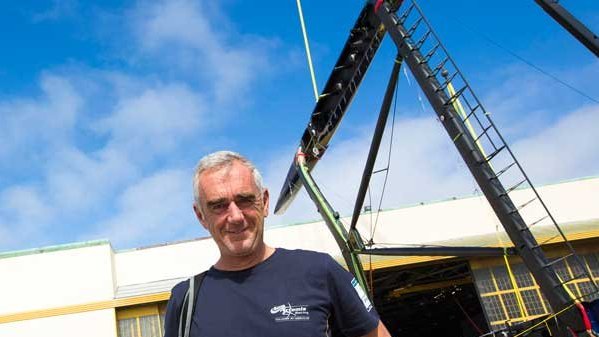