Sébastien Col : " I decided to go full speed into what the America’s Cup has become : match racing on foiling boats" 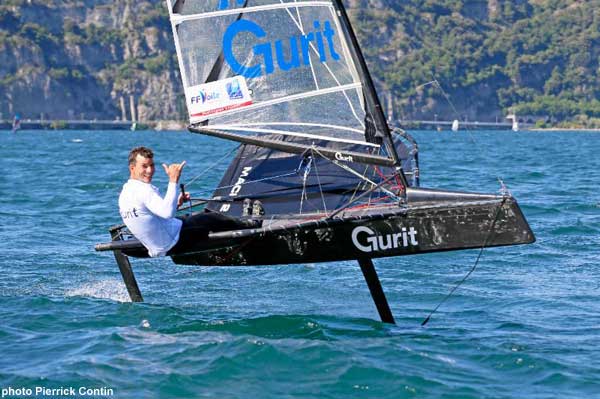 Sebastien Col starts his summer of sailing on foiling boats with the Moth Italian National Championships kicking off today as part of The Foiling Week in Torbole, Lake Garda, Italy. The talented skipper who was at the helm of the French Challenger for the 32nd America’s Cup America's Cup #AmericasCup in Valencia in 2007, runner-up of the World Match Racing Tour World Match Racing Tour #WMRT in 2008 and number 1 of the ISAF Match Racing World Ranking in 2008 and 2009, is taking a new step up in his career, with the ultimate goal to come back on the America’s Cup America's Cup #AmericasCup now organised on foiling boats since the successful 34th edition that took place in San Francisco in 2013.

The Moth Italian National Championships are taking place July 4-6th in Torbole, Lake Garda, Italy, and they are the first stage on Seb Col’s summer schedule on foiling boats. After having sailed many years at the highest level as a helmsman on the World Match Racing Tour World Match Racing Tour #WMRT , the America’s Cup America's Cup #AmericasCup and many prestigious top level racing circuits such as the RC44 and the TP52 circuits, "Seb Col," who is best known as a tough worker and the most international French sailor of his level and generation, is taking a new turn in his career with the challenge to sail as much as possible on every type of foiling boats in order to develop his skills. His goal is to prepare himself the most accurate way in order to go back to the America’s Cup America's Cup #AmericasCup with a view to join a team and to offer his expertise in match racing tactics with the new foiling approach, his experience of the America’s Cup, but also his experienced support in coordinating the relationships between sailors, designers and engineers, based on high technology projects coordination he’s had the opportunity to manage in full or partly lately.

Sebastien Col explains his project and what he has done since the 32nd America’s Cup in 2007 :

"After Valencia in 2007, we have carried on working with the French team ALL4ONE, sailing the Louis Vuitton Trophies and the Audi MedCup in TP52, but many changes occurred and the America’s Cup switched to a new format on multihulls, and the project stopped. I had already realized in 2010 that I wanted to complete my America’s Cup and match racing experience by some multihull sailing. So I started to sail where you could actually get the best experience you can hope for : sailing offshore on big multihulls. I joined Michel Desjoyeaux and Foncia’s MOD70 project in 2012, did two transatlantic races and one European Tour, learning a lot with all the miles we did about the manoeuvres, the driving and the trimming and tuning of such spectacular engines. Thanks to my good results, I then had the chance to join team Edmond de Rothschild’s MOD70 Gitana in 2013, we won all our races, and I found myself definitely addicted to multihull sailing.

I was doing other interesting projects on top level monohulls at the same time, and I still do, but I realized that the America’s Cup had always been what I really wanted to go back to. When I watched the 34th America’s Cup regattas on foiling AC72 AC72 #AC72 , and the outcome with Oracle Team USA’s win, everything became crystal clear about what the future would be made of. Besides, having always had a strong interest in technology since I studied composite materials and worked in my father’s boatyard while I started to compete in match racing, I can easily say that the technology side of the America’s Cup has always attracted me, probably as much as the sailing side.

So I decided to go full speed into what the America’s Cup has become : match racing on foiling boats, combining all the strong and proven skills that I have, but being very realistic with the fact that I have a lot of work in front of me. My motivation is huge, and I think the Moth in particular will help me make fast progress on foilers, even if I will need to spend a huge amount of hours on the water. It is actually what I already do during all my spare time when I’m not working on the 100ft Wally I’ve been with for five years now (Magic Carpet 3), where high technology, long term project coordination and management such as on the America’s Cup are my main focuses : an other key asset that I have been able to develop on strong bases thanks to Sir Lindsay Owen-Jones.

The Moth is the perfect tool for me. It is accessible when starting from scratch, and the French Sailing Federation has helped me a lot by providing me the boat. Also the learning curve factor is very important. Last but not least, it is about getting in touch with a completely new network of specialists too. All in all, the whole project is about starting a new adventure the right way.

2014 is a quantitative and a building phase, as I call it. I don’t have results targets, which would be unrealistic at this stage, and I will need to step back especially with this first Moth regatta, since my priority is to learn as much as possible. Besides, I also need to test as many boats as I can to get a maximum of information, in order to build the second phase for 2015 from there with my own project, possibly a GC32 GC32 #GC32 , which should also help me to achieve the goal to join an America’s Cup team at some point. I will of course continue to sail with the Moth next year as well. The dream project would be to have a third type of boat, but we are not there yet, since we need to fund the project first. My strength stands in the fact that I like to understand projects 100% and with a 360° view, which also makes sense for sponsors who work the same way for obvious reasons : they need to keep control to achieve their goals the best possible way.

There is a lot of work to come, but I’m very excited about it and eager to give all that I have to succeed, and I hope that some other sponsors will see their interest in taking up the challenge with me and Gurit."