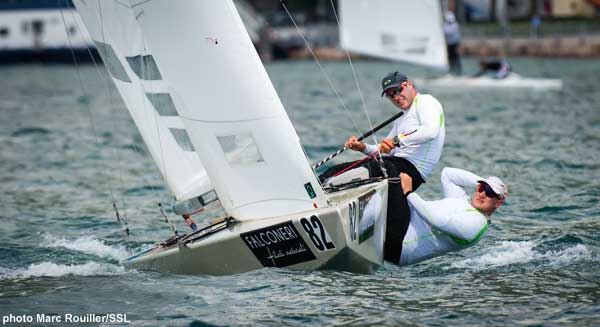 Today, July 5th, the International Star Class World Championship was decided in dramatic style on the last leg of the last race. GER 8340 Robert Stanjek with crew Frithjof Kleen led by ten points going into the last race and held on in a nervy final race to become the new world champions and the first German world champion for seventeen years.

Clouds above The Dolomite Mountains and clear blues skies above Lake Garda provided classic Ora conditions, with 12 knots of warm breeze pumping from the south. The first Saturday in July meant plenty of windsurfers and kite boarders out on the lake and sky divers forming arial acrobatics riding the thermal wind from Mount Baldo. Hundreds of spectators watched the drama unfold from the pristine Lake Garda beaches and thousands more watched the action, via Virtual eye, broadcasting the event live for the first time.

Once again, the first start resulted in a general recall and the race committee hoisted the Black Flag for restart. Nine boats were still over, resulting in their disqualification and yet another general recall. Third time lucky, the fleet got away clear with ITA 8491 Diego Negri with crew Sergio Lambertenghi making the best start showing great pace on the first upwind leg. GER 8340 Stanjek/Kleen made a conservative start but failed to get into good pressure and slipped back to 16th position. GRE 8434 Emilios Papathanasiou with crew Antonis Tsotras rounded the first windward mark with a significant lead. In second place at the top mark, ITA 8491 Negri/Lambertenghi played the shifts well to take the lead at the first bottom mark, as did NOR 8317 Eivind Melleby with crew Bruno Prada. By the end of the third leg three teams were in the hunt for the world championship. ITA 8491 Negri/Lambertenghi. NOR 8317 Melleby/Prada and GER 8340 Stanjek/Kleen.

In clear air, ITA 8491 Negri/Lambertenghi extended their lead on the water and finished the race well ahead of the fleet but a win in the last race was not enough. NOR 8317 Melleby/Prada showed spectacular speed on the last downwind leg, overtaking GRE 8434 Papathanasiou/Tsotras and attacked SUI 8364 Flavio Marazzi with crew Anouk Marazzi. The two teams crossed the line overlapped but the Marazzi husband and wife team was just ahead by barely one metre. Meanwhile GER 8340 Stanjek/Kleen were in a desperate struggle to secure the world championship title and with a last gasp effort, the German team moved up to 12th, enough to win the International Star Class World Championship by two points. ITA 8491 Negri/Lambertenghi were second on countback from NOR 8317 Melleby/Prada.

GER 8340 Stanjek/Kleen became the fourth German pair to lift one of sailing’s most prestigious trophies after : Kuhweide/Meyer in 1972, Hagen/Hoesch in 1981 and Hagen/Ferreira in 1997.

“We made a mistake on the first beat and put ourselves under a lot of pressure.” Admitted Frithjof Kleen. “The first downwind leg was very one sided and we had little opportunity to make any gains but a good second beat put us back in contention but we really didn’t know the overall position on the final downwind leg, so we concentrated on taking 12th position, which we thought would be enough. We dared not believe it when we crossed the line but when were told that our provisional result had been enough, we were so delighted. We came second in 2011, so to win this year has finished that feeling.”