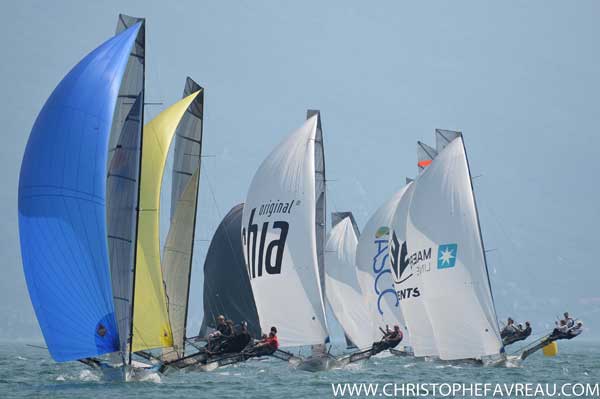 17 boats from Europe, Australia, New Zealand and USA – spend the week racing in front of Campione del Garda, a small town on the west side of the Lake Garda. Races were sailed in conditions from light wind to fresh wind up the 22 knots !

The last day was sailed in perfect “Campione conditions” : The south wind “ora” was between 10-16 knots

The big winner of the day and winner of the European Championship was team “Black Dog” helmed by Jarrod Simpson, Sheet Grant Rollerson and Sam Gaslin in the Bow – the sailed the 3 races with a strong 1,1,2 which put them on 24 points – good enough to win the European Championship. Just in front of 18 foot legend John Winning, sailing with Jim Beck in the front, Cameron McDonald on the sheet. They had 25 Point and they moved up from 4 th to 2 nd the last day. Howard Hamlin, USA, sailing on CST Composites with Scot Babbage several time world Champion and Mark in the bow – were leading before the last day but dropped back to 3 rd place with 29 points.

The European Championship is one of the 4 Grand Prix races in Europe. Next race is in Travemunde, Germany in july and in the end of August the Dutch Grand Prix will take place in Bruinisse.