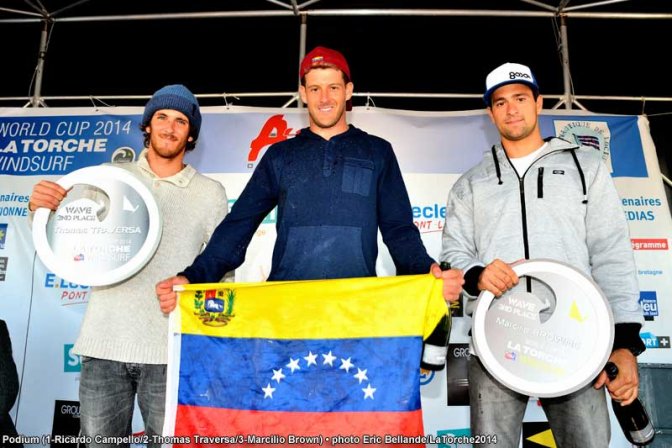 La Torche only produced one day of wind over the nine days, but the one day of competition was one to remember as La Torche produced some of the best conditions of the year, for the wave sailors, with 20-30 knot winds and powerful, peeling, clean waves, providing the perfect platform for the world’s most radical sailors to throw themselves skywards.

At the end of an amazing single elimination, Ricardo Campello (Patrik / Point-7 / MFC), reigned supreme in the starboard tack conditions to claim his maiden victory on the PWA Wave World Tour in front of thousands of adoring fans, which propels Campello into the title race with Thomas Traversa (Tabou / GA Sails) and Victor Fernandez (Fanatic / North / MFC) the only other men who can still win the 2014 PWA Wave World Tour.

Having come so close on so many occasions, Ricardo Campello, finally celebrated his maiden victory on the PWA Wave World Tour, after producing a superb performance in the single elimination. On his way to the top of the prestigious podium the Brazilian defeated Nicolas Akgazciyan (99 International / Point-7 / AL360 / Maui Ultra Fins), Alessio Stillrich (Fanatic / North), Antoine Martin (JP / NeilPryde) and Robby Swift (JP / NeilPryde / Mystic / Maui Ultra Fins / SWOX), before also defeating Thomas Traversa (Tabou / GA Sails) in a close fought final. Victory in La Torche rockets Campello into third in the overall rankings, having discarded a joint 17th from Tenerife, but more importantly victory throws the Brazilian into the title race with just one event to go. Will Campello be able to capitalise on the momentum he has created and pip either Thomas Travesa or Victor Fernandez to the 2014 wave world championship ? You’ll be able to find out next week as the title showdown takes place at Ho’okipa, Maui, Hawaii.

Ricardo Campello had this to say after capturing his maiden PWA Wave event victory :

“First of all thanks to everyone, who has been to the event, watching and supporting us. Thanks also to Christophe [Boutét] for organising this great event, I really hope we get the chance to come back here again next year.”

“This event has been absolutely amazing for me. This is the first time that I’ve won a PWA wave event, so it’s a special one. I’ve been fighting for it for many years and have been close on several occasions, so to finally win is great. The level on the tour at the moment is amazing, all the boys are sailing unbelievable.”

“I’d also like to thank everyone who has believed in me and of course my new sponsors - Patrik, Point-7, Powerex and MFC - who have offered me unbelievable support, I’m really, really happy. And lastly I’d like to dedicate this victory to two really good friends of mine who passed away. 4 or 5 years again one of my good friends past away and then last year the windsurfing world lost André Paskowski, who was also one of my best friends. So this is for them. Thanks again to everyone for being here.”

Thomas Traversa continued his imperious form in La Torche, as he backed up his victory in Denmark, with a superb second place, which ousts Victor Fernandez from the top of the overall rankings for the first time this season as TT takes control of the title race. Traversa produced another fantastic display and busted out radical frontside wave 360s combined with fluid, effortless riding, to dispatch of his rivals. Traversa has now become the man to beat with a victory and two second places to his name, but the Frenchman still feels as though Fernandez is the favourite heading into the final event of the year in Maui, adding :

“Moving up in the rankings is a little bonus, but for me Victor [Fernandez] remains the tour leader heading to Maui”.

Completing the podium is Marcilio ‘Brawzinho’ Browne (Goya Windsurfing / MFC) as the reigning world champion returns to the top three for the first time since Pozo, which sees Browne rise to fourth in the world. Unfortunately though, third place isn’t enough to keep the Brazilian in the title race, meaning a new world champion will definitely be crowned in Maui. Browne had looked like a top contender for the title here, rotating through a whole repertoire of brilliant jumps, including an absolutely massive stalled double, but couldn’t quite muster victory against Thomas Traversa in the semifinals and had to settle for third.

Having claimed his first ever finish on the podium in Denmark, Robby Swift, almost made it back-to-back podium finishes here in La Torche, as the Brit produced an inspired display of sailing, including landing the only pushloop forward of the event. However, Marcilio Browne, won the battle for third meaning Swift finished fourth - rising to sixth in the overall world rankings. Swift also played a major role in turning the title race on its head, as the man who defeated the then current tour leader - Victor Fernandez - which allowed Thomas Traversa to leapfrog the Spaniard after securing his place in the top two.

Antoine Martin (JP / NeilPryde) enjoyed his finest result to date on the PWA Wave World Tour as he broke into the top five for the first time in his career. The twenty-one year old claimed his biggest scalp to date, on his way to fifth, as he dispatched of Philip Köster (Starboard / Severne / Maui Ultra Fins) with a sick goiter helping him along the way. Meanwhile, Alex Mussolini (Tabou / GA Sails), Josh Angulo (Angulo / Gun Sails) and Victor Fernandez all share joint fifth, which sees Fernandez slip to second in the overall rankings.

Unfortunately the wind failed to return after one epic day of competition, so it was not possible to gain a result in the men’s and women’s slalom. The slalom title race will now be decided in the final event of the year as both fleets heat to New Caledonia, which runs between the 18th to the 23rd November.

That concludes the 2014 La Torche PWA Grand Slam. La Torche showed the world class conditions it can produce over the last nine days, with the Atlantic Ocean continually pumping swell into La Torche’s pristine white sand beaches. The event wasn’t just a huge success on the water, but off it too, with thousands upon thousands of people attending the event to rub shoulders with the stars of the windsurfing world. Thoughts now turn towards Maui where the 2014 wave world titles will be decided.

In just a few days the final wave event of the year will begin at the globally renowned Ho’okipa Beach Park. Who out of Ricardo Campello, Thomas Traversa and Victor Fernandez will be able to hold their nerve and claim glory ? And who will buckle under the pressure ? In the women’s Daida Moreno (Starboard / Severne / Maui Ultra Fins) heads into the event in control of the title race, but will she be able to keep her sister, Iballa Moreno (Starboard / Severne / Maui Ultra Fins), at bay ? Do you think the legendary twins will be at the top of the podium again ? Or will one of the super talented locals be able to rain on their parade. There’s only one way to find out… and that’s by tuning into www.pwaworldtour.com. Here you’ll be able to follow the amazing action as it happens via the PWA live stream and live ticker.