Franck Cammas : "It was nice to sail again on the Flying Phantom" 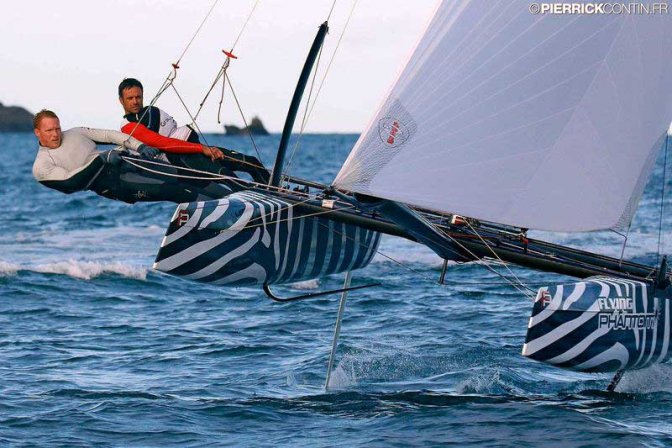 During the weekend of the 10th Route du Rhum Route du Rhum #RouteDuRhum start, the 2010 edition winner Franck Cammas joined the Phantom Sailing Team for a flying session in front of Saint Malo with the Flying Phantom. It was a good opportunity for the French skipper, to test the production version of the Flying Phantom as he collaborated to the development of the R&D prototype with the Groupama Sailing Team.

What do you think of the production version of the Flying Phantom ?

It was nice to sail again on the Flying Phantom, it’s been a year now I haven’t sailed it. The evolutions are very good and the new foils as compared to the prototypes ones are much more stable especially in moderate sea. We encountered only few stalling during the session and the boat is relatively easy in this type of conditions.

Yes, but it is not the same challenge, not the same stress than for the Route du Rhum Route du Rhum #RouteDuRhum Sunday start with all the boats and ribs around and today we are not going to Pointe-à-Pitre. Furthermore, it is enjoyable to sail today in front of Saint Malo with these good weather conditions.

Yes we will fly in 2015, we are continuing the development of our C-Class catamaran working on foils and appendages like the ones of the Flying Phantom, but the C-Class with the rigid wingsail is a little bit different and more nervous to sail. We also except with Team France to fly the AC45 AC45 #AC45 next year, as the America’s Cup America's Cup #AmericasCup World Series will race on modified foiling AC45s.