Oliver Bridge blows away the kite competition in Abu Dhabi

In a four way single race shoot out for the Open Kiteboarding title, Great Britain’s Oliver Bridge used his exceptional speed to blow away the competition. Bridge has been exciting to watch on the race track with blistering pace that none of his rivals have been able to contend with.

In one of the most important races of the year Bridge was relieved to turn his excellent series into gold by taking the victory,

“That was pretty intense,” he smiled. “We had two semi-finals and then the final which the winner would take, just on that race. I managed to remain unbeaten in all of my heats and then I won the final so I’m really happy.

“It’s the first time we’ve had the kites in an ISAF event like this. I’ve had good results all year ; I managed to win the European Championship so it’s great to end the year with another win, which is a really important one.

“It’s been pretty amazing in Abu Dhabi. We’ve had great conditions and great racing. Some of the days have been intense with short and fast races. It’s been exciting.”

Nocher fought hard to catch Bridge but was unable to match him. He was nonetheless pleased with his week,

“The racing today was fantastic today,” said the Frenchman. “In the World Championship the races are usually 15 minutes long but here they’re only 4-5 minutes so it’s intense. I’m very happy to be second but it was a big fight between Ollie.”

Gruber fended off Trittel to complete the podium. 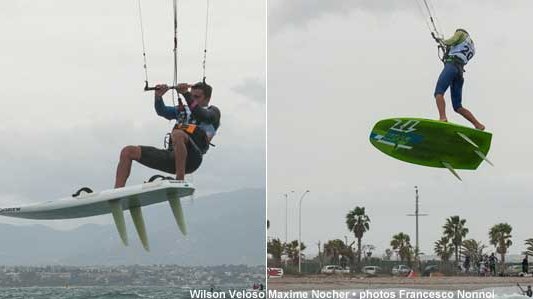