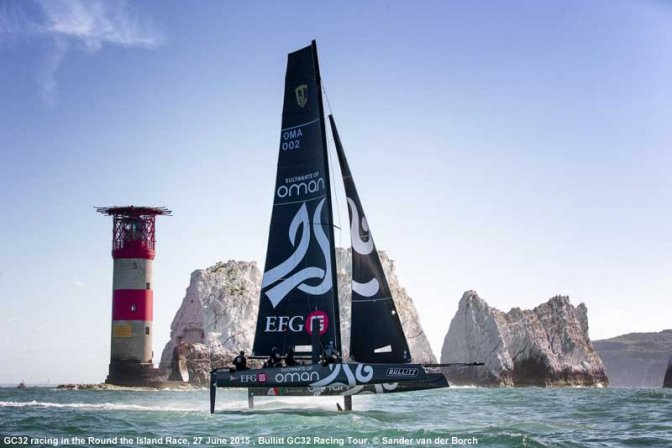 After the slowest race last year, the GC32s performed admirably in this morning’s spectacular JP Morgan Asset Management Round the Island Race.

Conditions could not have been better for the GC32s, with brilliant sunshine and 12-15 knot winds from the west south-west.

The GC32s were part of today’s second start, setting off from the Royal Yacht Squadron line at 0710 BST, 10 minutes after the big monohulls. Upwind in the Western Solent, by the time they had reached Yarmouth, nine miles in, they had picked off all but the fastest monohulls as the lead continually swapped between Sultanate of Oman, Alinghi and ENGIE.

At the Needles, Sultanate of Oman was ahead, but with just one minute separating the four boats.

For the GC32s the second leg, a run down to the southernmost tip of the island, St Catherine’s Point, provided the biggest ‘yeehaas’ as the nimble flying catamarans overhauled the 100ft monohull Leopard and even closed on the MOD 70 trimaran Concise 10. By the time the boats reached St Catherine’s, Alinghi had edged into the lead but Sultanate of Oman had managed to sail lower than her.

After the gybe off St Catherine’s onto the third leg up the southeastern side of the island, the crews began to struggle. As America’s Cup America's Cup #AmericasCup helmsman Paul Campbell-James, standing in for an injured Leigh McMillan on Sultanate of Oman, observed :

“We were going straight down the waves and we just couldn’t stop the boat - it was full on ! We had to back off and sail deep. Occasionally we’d get on the back of a wave, we’d start foiling and the kite would start flapping. And we had some massive nosedives - big enough so that we would be fully underwater and get thrown forwards.”

By Bembridge, at the eastern end of the island, it became apparent they would not be able to catch the MOD70, nor better the Ben Ainslie Racing AC45 AC45 #AC45 catamaran’s record Record #sailingrecord from two years ago.

Hardening up on to the wind returning into the Solent, Sultanate of Oman held the advantage over Alinghi as they passed between the Napoleonic forts, but by Ryde they were at each other’s throats again.

“We were in front a couple of miles from the line. We played the shift and came back – it was match racing ! I wish we had tacked to control - we believed in the left, but the right paid off.”

This allowed Sultanate of Oman home first ; Alinghi less than a minute astern. “We weren’t more than a minute away from them for the whole race,” observed Paul Campbell-James. “I hope the America’s Cup America's Cup #AmericasCup is as exciting as this !”

Despite being beaten, Ernesto Bertarelli thoroughly enjoyed his third lap of the Isle of Wight.

“It is a great course. I still think we should have gone between the Needles !”

In fact the boats did take the ‘brave’ option of passing between the Needles and the wreck that lies off it.

“The Round the Island was fun. It was cool to do this race. In 14-15 knots, it was very exciting, but the GC32 GC32 #GC32 prefers inshore races. Only the MOD70 finished ahead of us, but in a northerly we could have been as quick and even broken the record Record #sailingrecord .”

American two time Melges 32 World Champion Jason Carroll came home fourth among the GC32s, just five and a half minutes behind the winner.

“After all the build-up, I expected it to be hairier than it was !” said a salt-encrusted Carroll as he arrived back in Cowes’ Venture Quays. “It was certainly survival conditions at times and we had a couple of bruises from when we plunged the bow in around the back side. The weather was beautiful and it was cool rounding so close to the Needles.”

As to his first regatta on the Bullitt GC32 GC32 #GC32 Racing Tour Carroll said :

“I would do this again and I would certainly do a three day series here again in the GC32. I love the boat and I loved it even before racing it. It has definitely made me realise that to be competitive in the boat I need to put in some more practice.”

From here the Bullitt GC32 Racing Tour moves on to the Kiel Cup over 30th July-2nd August.