Zara Phillips joined rugby stars from England, France and Scotland in Cowes in the annual Artemis Challenge, as a fleet of 16 of the biggest ocean racing yachts in the world raced around the Isle of Wight in support of their chosen charities.

Although the English summer delivered a deluge of rain, thunder and lightening, the competitive spirit was running hot ahead of the England-France clash at Twickenham this Saturday. Zara Phillips sailed onboard Artemis Ocean Racing with husband Mike Tindall, who was itching to beat his French rugby rivals Serge Betsen (on Musandam-Oman Sail) and Sylvain Marconnet (on SMA) to land the first blow for England. Scottish rugby legend Gavin Hastings completed the rugby line-up racing onboard the all-female boat of SCA.

But it was the impressive trimaran Musandam-Oman Sail, with the French team of skipper Sidney Gavignet and former Les Bleus flanker Serge Betsen, who claimed overall line honours at the head of the fleet of four multihulls, and received £2,000 for their charity of choice, the Al Hayat Association. In the competitive fleet of ten IMOCA Imoca #IMOCA monohulls, it was PRB, skippered by decorated French sailor Vincent Riou, who beat the world class line-up of offshore racers to claim £7,000 for the charity Action Enfance Fondation MVE. And in the battle of the two Volvo Ocean 65s, the all female Team SCA with Gavin Hastings onboard beat Dongfeng to claim £1,000 for Women in Sport.

“We are very happy. The Artemis Challenge is a race that we have been doing for several years now and we are very happy to win it – we had some great guests onboard, famous French rugby player Serge Betsen and Ben Saunders, a celebrated British explorer. It is hugely satisfying to see the progression that our Omani sailors have made, for Oman Sail this win is very exciting, we are making big steps with our development. We have a bit of a love story with the UK ; last year we broke the Round Britain and Ireland record Record #sailingrecord and earlier this year, we added the Round Ireland record Record #sailingrecord , we didn’t break the Artemis Challenge record today, but maybe next time.”

“It was a great day. Very exciting and good fun around the back of the island, windy but very wet ! Bit disappointing that the wind died at the end but it was certainly the windiest and wettest Artemis Challenge I have ever done !”

“We put ourselves in a position, made a call to sail close to shore but it was the wrong call. A gamble. And then everyone came to a standstill at the end so we thought we had a chance. I saw Serge won – it’s the only win he’s getting this week ! We’re not losing to the French at Twickenham !”

Now in it’s ninth year, the Artemis Challenge continues to be the pinnacle event at the Aberdeen Asset Management Cowes Week, attracting the biggest names in sailing and stars from sport and entertainment. 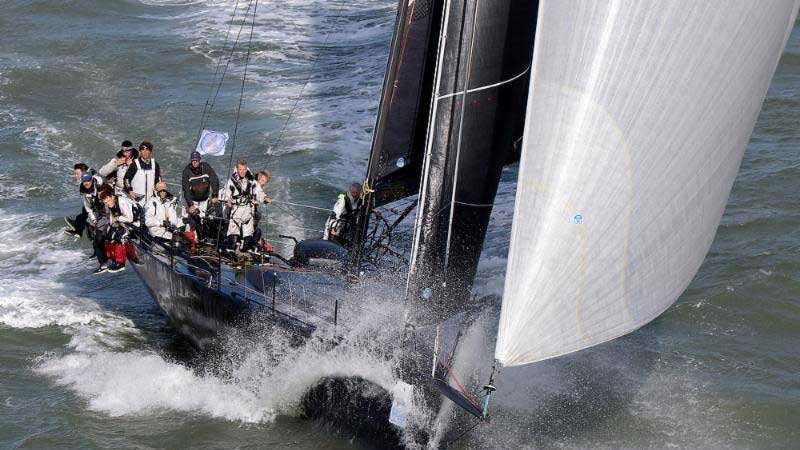