"It just kept coming at my board and I was kicking and screaming. I just saw fins, I didn’t see any teeth" 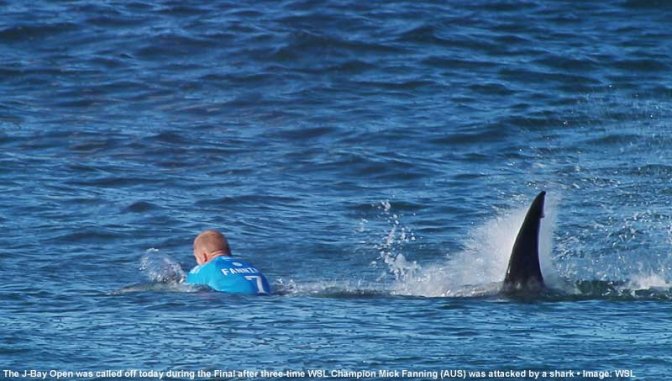 The J-Bay Open, Stop No. 6 on the 2015 Samsung Galaxy World Surf Surf #Surf League (WSL) Championship Tour (CT), has been called off following a dramatic incident that involved three-time WSL Champion and defending event winner Mick Fanning (AUS) being attacked by a shark in the opening minutes of the Final against Julian Wilson (AUS).

The scene unfolded live on WorldSurfLeague.com as the Australian essentially fought off the two animals before the Water Safety Team quickly arrived and pulled both Fanning and compatriot Julian Wilson into the safety boat. Despite a severed leash, Fanning remained physically unscathed by the incident.

"We are incredibly grateful that no one was seriously injured today," Kieren Perrow, WSL Commissioner, said. "Mick’s composure and quick acting in the face of a terrifying situation was nothing short of heroic and the rapid response of our Water Safety personnel was commendable - they are truly world class at what they do. The safety of our athletes is a priority for the WSL and, after discussions with both Finalists, we have decided to cancel the remainder of competition at the J-Bay Open. We appreciate the ongoing support we have in South Africa and once again want to express our gratitude to the Water Safety Team."

“I was just sitting there and I felt something grab or get stuck in my leg rope and I instantly just jumped away,” Fanning said. “It just kept coming at my board and I was kicking and screaming. I just saw fins, I didn’t see any teeth. I was waiting for the teeth to come at me as I was swimming. I punched it in the back. I’m totally fine, I’ve got nothing wrong with me. There’s a small depression in my board and my leg rope got bitten and I’m totally tripping out.”

“I was just cruising and waiting for my turn, my opportunity and I knew Julian (Wilson) was down the point,” continued Fanning. “I was just about to get moving and start paddling again and all of a sudden I had this instinct that something was behind me. I started getting pulled underwater and then the thing came up and I was on my board and it was right there. I saw the whole thing thrashing around but I was getting dragged under by my leg rope. I felt like it kicked me off but it was still there going and I was still attached to my board. I felt like I punched it a couple of times and then it was dragging me and then my leg rope broke."

"I started swimming and screaming and yelling at Jules (Julian Wilson) to move as well, but he was coming at me," said Fanning. "What a legend, coming after me. I was swimming in and I turned around and I had this thought, what happens if it comes to have another go at me, so I turned around so I could at least see it coming. Before I knew it the boat was there, the jet skis were there and we were in safely. I just can’t believe it. To walk away from that, I’m just so stoked. I want to let all my family and friends know that I’m okay.”

“Mick (Fanning) was kind of out in no man’s land so I was really watching him and had my eyes on him,” said Wilson. “Mick (Fanning) was looking down the point and I saw the whole thing pop up behind him. It can up and he was wrestling it. I saw him get knocked off his board and then a wave popped up and I thought, ‘he’s gone’. I felt like I couldn’t get there quick enough. The results don’t mean anything to me, I’m just happy he’s alive. I literally thought when I was paddling for him that I wasn’t going to get there in time, especially when I saw him off his board and swimming away. I thought it was going to grab him and take him under. I’m so happy we’re both on the beach right now, I was so worried about Mick’s life.”