Sailing World Cup : Weymouth was the final event before the Rio 2016 Olympic Games 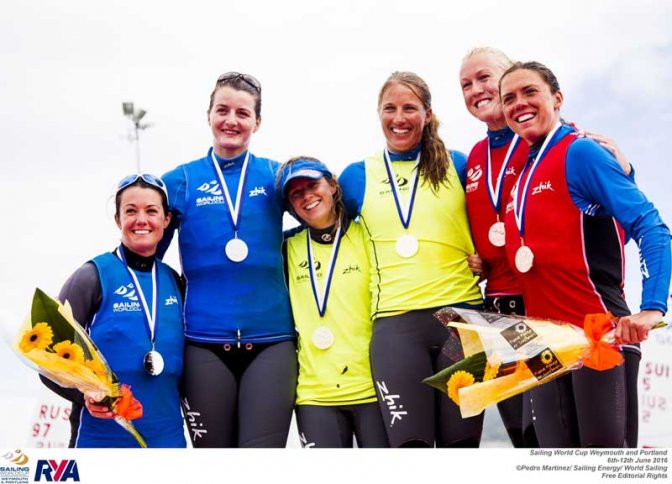 Sailing World Cup Weymouth and Portland was the final opportunity for sailors to test themselves at an elite, official event before the summer showcase in Rio de Janeiro, Brazil.

The Medal Races provided a glimpse of what is to come at Rio 2016 with those aiming to peak for the Olympic Games topping the podium.

Croatia’s Sime Fantela and Igor Marenic expertly tackled the Medal Race in the Men’s 470 to win an impressive gold medal.

They grabbed the lead early on and never looked back as they overcame a six-point deficit over the leading British and Spanish teams.

"It feels great to win in Weymouth,” beamed Fantela immediately after racing, "We have never done it. When we were preparing for the London 2012 Olympics we were always third and fourth. It’s great to finally win here.”

Fantela and Marenic have won key events in the build-up to Rio 2016. They knocked Mat Belcher and Will Ryan (AUS) off of the Men’s 470 World Championship throne, winning the title in Buenos Aires, Argentina earlier on in the year. They then snapped up Sailing World Cup Hyères gold and the Weymouth and Portland victory puts them in a strong place going into Rio 2016.

"We are happy with the way we are sailing,” said Marenic, "We’re taking some good points away and some things to work on with Rio really close. This is showing us we are in a good way and we are looking forward to Rio.”

Great Britain’s Luke Patience and Chris Grube and Spain’s Jordi Xammar and Joan Herp were tied for the lead overnight on 24 points with the Croatians six points behind in third.

The Croatians concentrated on winning the race as both teams pushed to make up the places. Xammar and Herp came closest, finishing level on 32 points with the Croatians, missing out on gold via countback. Even though they had to settle for silver, Xammar and Herp were both delighted with their week.

"It was a good championship for us,” expressed Xammar, "It’s our second podium in the world cup and having a silver is amazing. We won in Qingdao [2014] but not all the top guys were there.”

Herp added, "At one moment we thought we could move up [to first] at the last mark. Our speed brought us up into the silver medal position.”

Patience and Grube finished the race in sixth and completed the podium.

British sailors dominated in the Women’s 470, making it a clean sweep of British flags on the podium.

Hannah Mills and Saskia Clark (GBR) successfully defended the title they won in 2015 after a second in the Medal Race. Sophie Weguelin and Eilidh McIntyre (GBR) took the race victory and with it, silver. Amy Seabright and Anna Carpenter (GBR) completed the all-British podium.

Switzerland’s Linda Fahrni and Maja Siegenthaler were tied with Mills and Clark at the top of the leader board before the Medal Race but a seventh meant they missed out via countback, ending up fourth overall.

Scott finished second to Lobert in a physically tough Finn Medal Race that saw each sailor push the limits. After racing Scott said, "This is about as physical as it gets. The water was flat, there was not a lot of surfing and with free pumping in 10 knots, you put as much energy into it as you can.

"The guys who did well made the most of that.”

Lobert was the standout sailor in the Finn class on the day, streaking ahead to win the Medal Race by 15 seconds. The Frenchman has enjoyed great success in Weymouth and Portland over the years, winning bronze at London 2012 and feels comfortable on the waters.

"I love Medal Races in Weymouth as I win most of them,” exclaimed Lobert. "I feel good here, I have good lines and I am fast.”

The Frenchman will be a major contender at Rio 2016 and has his eyes fixed firmly on Scott,

"We are pushing for Rio and we know that nobody is unbeatable. He [Scott] is dominating but this week I have been in front of him many times and I hope I can do it again in Rio.”

Training partners Nick Thompson and Elliot Hanson made it a British 1-2 in the Laser fleet as Australia’s Tom Burton was made to settle for bronze.

Burton had led for the most part of the week but a ninth in the Medal Race compared the Thompson’s fourth and Hanson’s third saw him drop down.

For the British pair, they shared their success together and highlighted their regime as the key to success. On the partnership Thompson said,

Hanson added, "It feels awesome. It’s my first World Cup medal and to be up on the podium with my mate, it means a lot. I’m proud to be his training partner. I’m happy with this week and hopefully it will put me in good stead going to Tokyo.”

Thompson’s victory in Weymouth and Portland, added to back to back World Championship titles, puts a tag on him as favourite for Laser gold at Rio 2016 but he feels no pressure,

"Most of the hard work going into Rio is done,” explained Thompson, "I’m pretty happy with where I am at and I’ve been working on some of my weaknesses and it’s starting to pay off. I’m peaking at the right time.”

Marit Bouwmeester (NED) dominated Mathilde de Kerangat (FRA) in the Laser Radial Medal Race to confirm her gold medal. The French sailor was Bouwmeester’s only rival for gold as she was well clear of the chasing pack. Taking a 13-point advantage over de Kerangat into the Medal Race, Bouwmeester’s approach was a brutal, yet fair one, as she match raced her opponent to the back of the fleet.

Bouwmeester engaged de Kerangat at the start and kept her at the back of the fleet for the entirety of the race to claim gold.

"It feels good to win,” Bouwmeester said, "I wasn’t certain on the left of the course so I changed a little bit and took France out. It was quite difficult to slow someone down in this breeze so I tried to hold her up as much as I could and I am glad I succeeded.”

At the front of the fleet, Lijia Xu (CHN) sailed away, taking the Medal Race win and with it, silver as the French racer dropped to third.

Toni Wilhelm (GER) and Peina Chen (CHN) held on to their overnight leads in the Men’s and Women’s RS:X.

In the Women’s RS:X, Chen’s run of race wins was ended by Great Britain’s Emma Wilson but the work done in the fleet races was enough for her to sail through in second and snap up gold. Victory for Wilson ensured she held on to silver with Isobel Hamilton (GBR) claiming bronze.

Peter Burling and Blair Tuke (NZL) have dominated in recent times but in their absence at Sailing World Cup Weymouth & Portland, their compatriots Logan Dunning Beck and Jack Simpson (NZL) stepped up to the mark.

The pair had a solid advantage heading into the Medal Race and a sixth confirmed the victory. Immediately after the win the duo were virtually lost for words.

"It [winning] is a bit foreign for us,” said Dunning Beck. "We’re usually chasing at the back of the pack. It’s awesome. Peter and Blair are great role models back at home and they’re setting the bar really high.”

Charlotte Dobson and Sophie Ainsworth (GBR) held on to their gold medal in the 49erFX after Alex Maloney and Molly Meech (NZL) made a final assault on top spot.

The Kiwis demonstrated excellent teamwork in the Medal Race and once they grabbed the lead it never looked like they would relinquish it. They came through 21 seconds clear of their rivals and then had to wait patiently to see where Dobson and Ainsworth finished.

The Brits followed in fourth place which was enough to give them gold by a single point and they were delighted with their week,

"It’s incredible,” said Dobson, "it’s amazing that it’s this close to Rio and we pulled this one out of the bag. It’s been a while since we have finished on the podium.”

Ainsworth added, "We’re happy with where our sailing is right now and things that we’ve been working on over the last nine months have come together.”

Maloney and Meech did all they could in the Medal Race but it just was not to be, however, they were still left with smiles on their faces.

"It was really cool to come out here and execute our plan,” said Maloney. Meech added, "We’re stoked with second but we were really close to first and that would have been nice but we’re happy with the day.”

Julia Gross and Cecilia Jonsson (SWE) rounded off the podium.

Sixth in the Medal Race was enough for Ben Saxton and Nicola Groves (GBR) to win gold in the Nacra 17. The pair held the lead heading into the final day and even though their main rivals to gold, Paul Kohlhoff and Carolina Werner of Germany, finished well ahead of them, the three consecutive race wins they picked up leading up to the Medal Race proved decisive.

Kohlhoff and Werner won’t leave Weymouth and Portland too disheartened as their silver medal hands them the German Nacra 17 spot for Rio 2016.

Sailing World Cup Hyères gold medallists Fernando Echavarri and Tara Pacheco (ESP) won the Medal Race but this was not enough to make it onto the podium. Billy Besson and Marie Riou (FRA) came through directly behind them, snapping up bronze.

Just 54 days remain until the start of the Rio 2016 Olympic Games so it’s full on from hereon in until the summer showcase. As for the Sailing World Cup, the series will resume in Qingdao, China before the centrepiece final in Melbourne, Australia in December. 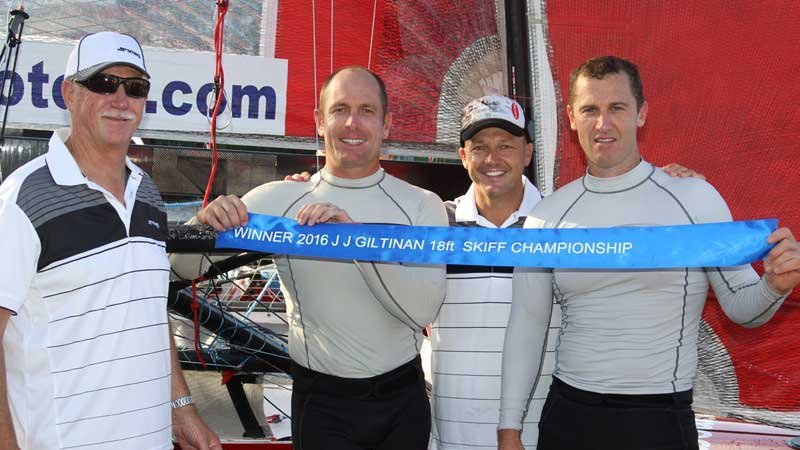 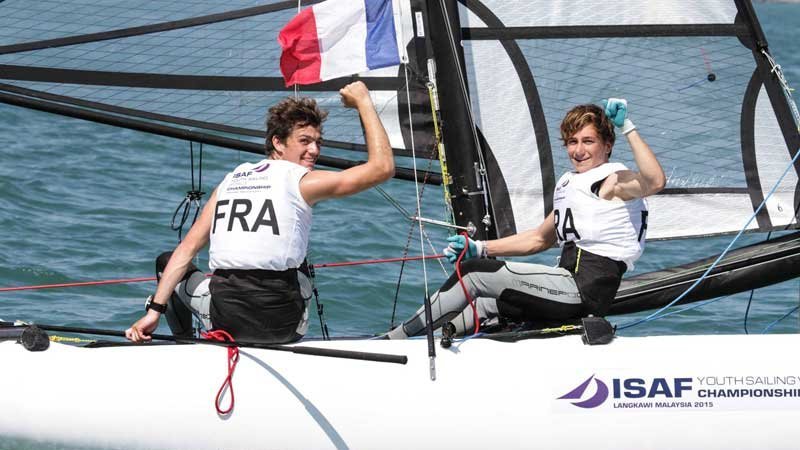